Good day folks! It is Tuesday again, and Nigel Skelchy from Malaysia shares his Tuesday Travel Tip on Bali. 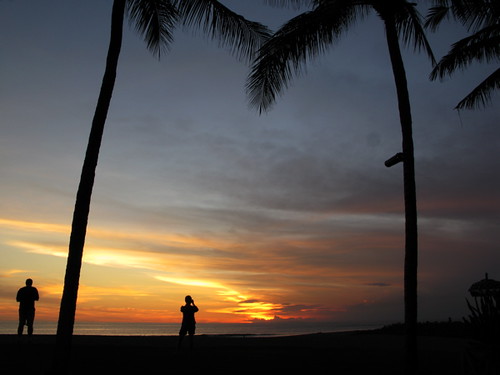 As the aircraft door thunks open, the breath of serenity washes over you like a cool towel served at the beginning of a luxurious Japanese meal. No matter how hot the weather gets, or how damp, or how hectic, this serenity seems to stamp itself on everything Balinese. 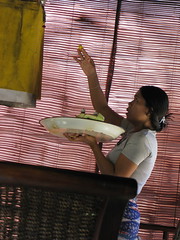 From the smile of…well, just about everyone who you might chance to meet to the morning devotionals at each little shrine situated at the cardinal points of every hotel/villa/home you may choose to visit, to the orderly rough and tumble of the chaotic driving on roads the width of my right thigh, the Balinese seem to realise that everyone is there for a reason and therefore worthy of respect and, at the very least, civility.  There is a fateful inevitability to Balinese life which seems to point serenely(there’s that word again) to the afterlife with this mortal coil as a way station meant to be enjoyed, happily, along the way.

All unbeknownst to us, while we made preparations to travel to Putu Bali Villa’s in Seminyak for a friend’s 50th Birthday party, we had booked to travel during a period of the Balinese Calendar which put us smack dab in some of the Island’s biggest religious and spiritual celebrations; namely “Nyepi” and “Melasti” with the big surprise of the Pengerupukan parade of Ogoh-ogoh in between. Furthermore, all the festivities seemed to be concentrated around Kerobokan/Seminyak where we were staying. 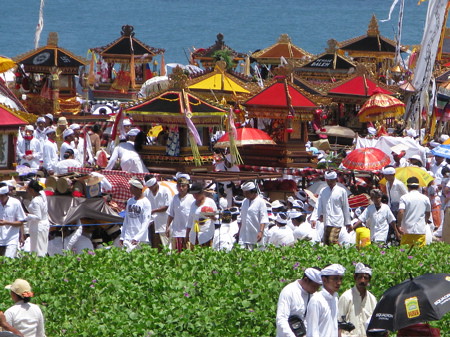 Bags of paper and lashings of books (with apologies to Enid Blyton) have been written about Balinese spirituality but as a Cliff’s Notes version, this is it; it’s Hinduism. But a unique version which is perhaps more akin to Buddhism and Shamanism than it is to traditional Hinduism as practiced elsewhere. There is a huge aesthetic display of ritualistic fervour which seems to be reflected by internal feeling.  Also, Balinese Hinduism doesn’t seem to place much stock on reincarnation but on community endeavour instead.

Little did I realise that our first planned trip with the group was really a portent of things to come. It would seem that while each trip to Bali brought a calmness about in me, this particular jaunt would feature spirituality as a defining moment of happiness felt on the return journey. I write this missing Bali tremendously and look forward to going back. There is a vague disappointment wafting at my edges but a glow of satisfaction warming the cockles of my heart. 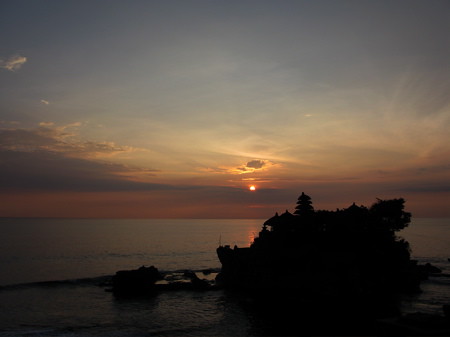 Tanah Lot to the west of the island really didn’t seem as impressive in the bright, warm, evening sunshine as the last time. But I wanted to share the making of this gorgeous memory with Allan. And it eventually did not disappoint. As the Sun Set (the capitals are deliberate because that’s how the Sun Sets in Bali. It just doesn’t set. It Sets) and each moment brought about a different grandeur and rush, the moment crystallized, and it was Shared in spades. Mercurial Golds morphed into fires of orange and washed into bruised purples and reds, all the while throwing the sillouhette of Pura Tanah Lot’s thatched roofs into stark, embossed relief against the flaming sky. If building a temple on the western tip of the island, deliberately framed against the power and majesty of the setting sun doesn’t demonstrate a love of one’s Gods I don’t know what does. 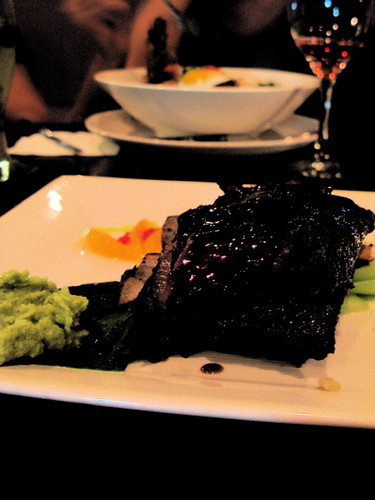 On the way back from Tanah Lot we head to Chandi in Seminyak for dinner for their Braised Beef Ribs (dark, meaty, rich, sweet, tangy, unctuous, melting like butter) and Charcoal Grilled Honey Soy Cardamom Yellow Fin Tuna.

Each Banjar seems to be in charge of it’s own affairs but come together during Melasti to bring their various Village Gods down to central Temples for their ritual fluff and fold. Staying at Putu Bali Villa we were fortunate to be just a spit and a throw away from Pura (Temple) Petitenget.

As we putt-putted out of the driveway on our scooters/mopeds (which are certainly a great help and probably the cheapest mode of transport in the town) we ran smack dab into a whole passel of hunky dudes (even a “Prince Harry”), bewitching dudettes, and wizened, enchanting  greybeards ever ready to offer a twinkle and a smile even WITHOUT the asking. Gamelan Gongs bonging, drums percussing, traffic stops, without complaint,  to wait the 15 to 20 minutes the procession of at least a hundred souls takes to pass, knowing that in 100m you may just have to stop and wait again. 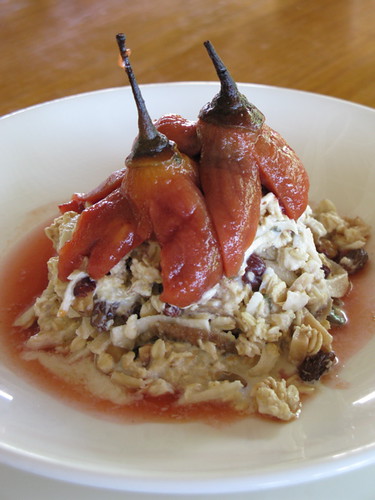 In orderly anarchy, the procession of the Gods of the hundred or so Banjar are carried upon the shoulders of their village braves and in rows and rows, they gather on the beach. There is a sussuration of conversation which never rises above a polite murmur and in the background you hear the louder declamations of the “master of ceremonies” over the loud hailer. But even as the multitudes throng, it’s never in frustration or bad temper. Equanimity rules.  The lucky find shade and spoon their packed lunches into their eager mouths with deft thumbs and those who can’t,  sit in the sun in cheerful forbearance doing the same. Everyone, even the casual fine dining La Lucciola restaurant, which is more used to serving expatriates, takes the invasion of it’s space in it’s stride. The toilet cleaner, who is obviously not usually on duty, just sweeps up the usually dry toilet and greets me with a grin.  Surprisingly, they don’t smell more rank, which you’d expect after hundreds of feet have tramped through their doors. The staff of “La Looch”  (who serves the best Bircher Muesli with Roasted Tamarillos) treat their fellow countrymen with respect and cheer unlike other restaurants in Singapore or Kuala Lumpur who would probably be sniffing down their noses in disdain.

The supervisor tells us that until all the Banjars’ put in an appearance they can’t start the ritual cleansing. But as morning ages into the afternoon, signs of the sedan chairs for the Gods begin to go into the sea and turn around for the return walk to their various homes.  We follow them back and on the way we spot Biku, a must stopover in any trip to Seminyak. They serve, unequivocally,  the BEST Afternoon English Teas at some very decent prices. 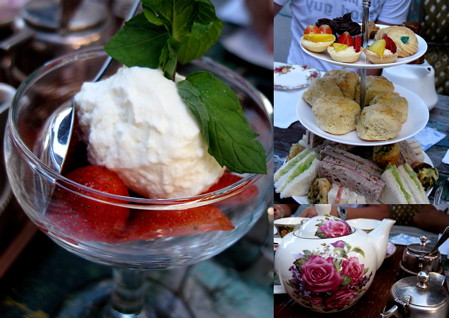 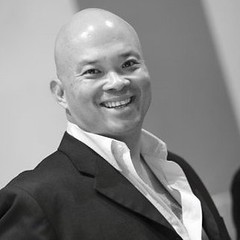 Nigel’s a dark, haunted soul (NOT!) who wakes up in the middle of the night to soften his butter to research cake making techniques and concoct alchemic flavours to put into their take away counters, A Slice of Heaven, found in Bukit Damansara, Jaya One, and Bangsar Shopping Centre at O Gourmet. Yes, he is one half of the dynamic duo baker boys.. Just Heavenly.

*all photos above are credited to the guest writer, Nigel

Wondering where to find a fancy lunch spot in Kuala Lumpur? Something made in French style with fresh ingredients? Enfin by James Won releases…