Perseus is the favored son of the god Zeus, but he has unwittingly ticked off the sea goddess Thetis. Just to make things worse, Perseus falls in love with the lovely Princess Andromeda, who used to be engaged to Thesis’ son. Soon Perseus is off on one quest after another, with Zeus helping, Thetis hindering, and lots of innocent bystanders getting stabbed, drowned, and squished.

Wow, I use to love this show when I was a kid. Of course, I am talking about the 1981 , original version of Clash of the Titans. I have not seen the new one yet as it is “akan datang” (coming soon) here in Malaysia, but since there has been so much hype in KL about it, I thought I would just talk about the old one, to create some hype of my own;)

Watching it as a kid, it was as riveting as Star Wars because I used to think that the only thing more heroic than a young Jedi knight out to thwart Darth Vader’s plans was a brave, handsome Grecian man upon a beautiful flying horse that slew ugly demons like Medusa.

It was not till much later, when I was all grown up that I noticed that Mount Olympus looked like a health spa for toga-clad thespians, who loafed around doing nothing much all day really, other than just acting like bored ‘Gods’ in the sky.

Also, Zeus (Laurence Olivier), whom I used to think was so admirable and strong was no more than  a fate-manipulating idiot who played around with people like they were pawns on a chess board.  He was constantly praising his darling Perseus (Harry Hamlin) while vengefully deforming Calibos (Neil McCarthy).

Poor Calibos. I always felt so sorry for the poor ugly sod.

Both Perseus and Calibos vie for Andromeda (Judi Bowken), and of course, the good looking one ALWAYS wins. Perseus and Andromeda’s love is short-lived and grinds to a premature halt when the god Thetis’ (Maggie Smith) is unwittingly insulted by Perseus’ comment on beauty, and she then demands a sacrifice in the form of the Kraken.

Only a gorgon’s stare can quell it, say the Stygian witches, so off goes the hero on a voyage of winged horses, two-headed watchdogs, Grim reaper-ish gondoliers, and strange robotic owls.  The Medusa(my favourite evil creature) is a slithering Hellenic Wicked Witch whose toxic blood gives birth to giant scorpions. Hence, my favourite scene in the entire show – Perseus holding up the head of the poor, very dead, Medusa.

Though many of the film’s effects sequences play out like they were cheap productions compared to today’s computer-powered animations they hearken back to a golden age of cinema when magic movie moments were created by painstakingly moving a model a fraction of an inch at a time, and shooting frame by frame. Stop motion animation at its best. Sigh, there will never be anything like it again, will there?

Cumi: I miss the old stop motion animation! I just caught the classic Jason & the Argonauts on the movie channel. Still entertaining after all these years. CGI is just too over-rated these days. Bring back old skool! 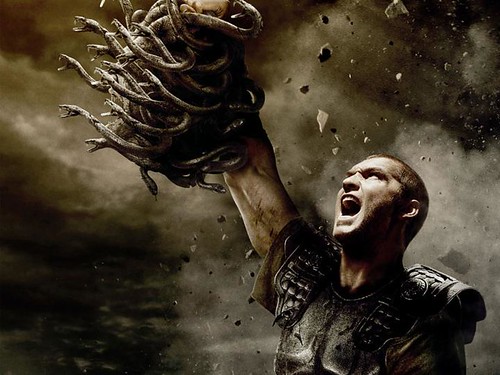 Anyway, now you know all the reasons I love the Clash of the Titans of 1981. I am hoping that Clash of the Titans 2010 will really knock my socks off. With Sam Worthington, my favourite action hero starring as Perseus, the show should really be a hit. Or will it? Only this THURSDAY will we find out in Malaysia, if the movie sinks or floats. Stay tuned to see what Cumi & Ciki have to say about it!

If you are one of the fortunate few who has already watched it – which one did you prefer?

Books on Clash of the Titans:

I have to say, that Phuket itself has never felt like an island at all to me. I mean, the place is huge and…