Pernod Ricard Malaysia recently invited us, Cumi & Ciki (via Marian Eu) to an exciting night out of wine and dine, specifically featuring the delightful food at Teeq and the fantastic wines of Montana. Montana, the makers of Brancott wines, planted the first modern day vineyards in Marlborough and created New Zealand’s first varietal wine with Gisborne Chardonnay. Then they made the original vintage of what was to become their country’s signature wine – Marlborough Sauvignon Blanc.The world knows best, Montana wines expressed as, Sauvignon Blanc in Malborough and Chardonnay in Gisborne.

There is a quintessential Kiwi story, about how a young immigrant named Ivan Yukich made wine to sell to American soldiers in World War Two. He used the name “Montana” (meaning mountainous), as his vineyard lay on a slope of the Waitakere Ranges west of Auckland. In the 1960s, his sons adopted the name for the family winery. The turning point came in the early 1970s. Within a few years, the company planted new vineyards in Gisborne, made New Zealand’s first pure varietal wine, started the very first commercial vineyards in Marlborough and made the original Marlborough Sauvignon Blanc! 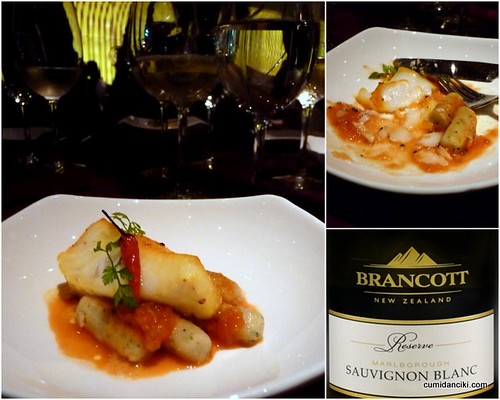 Anyway, we met the man himself, the international business manager of Pernod Ricard , Mr Sladjan Maksimovic and he was quick to fill us in on the fact that the wine of the night was suppose to be the Brancott Sauvignon Blanc 2008 paired with the Medallion herb scented Cod fish. Throughout the course of the night, he also talked us through the spectacular selection of wines, course by course. It is, after all, all about wine and food pairing, and the most interesting take home message for me was actually the fact that one should always pair the strongest taste in the dish with the strongest flavour/feature of the wine. So it goes, red meat need not necessarily go with a red wine, so long as you can find a strong, meaty enough white to go with it. And  the same works vice-versa. Thank you Sladjan, you have taught me something intelligent to say, or to make small talk about rather, at my next formal dinner. I am glad I met you!

For the pre-dinner or more famously known as the amuse bouche, we had the Crostini and Sambel. No, there is no typo actually. It truly was spelt sambel. What it was though upon closer inspection, was sambal (Malay-style sweet and spicy chili sauce). The crunchy Crostini went perfectly with the Montana Malborough Sauvignon Blanc 2007 and if I had to describe the wine, with what limited vocabulary I have, then I would have to say it possessed aromas of tropical fruit. Yes, this wine certainly displayed a full fruit intensity that was hard to ignore. It was overall, a well-balanced but slightly acidic wine.

Next, the same wine was paired with a gorgeous, rich and creamy Mushroom Soup. Teeq’s mushroom soup is truly divine. Thick and pungent with wild mushroom flavours , it is everything I’d expect from a good mushroom soup. You can imagine how the same slightly acid, yet fruity wine would have balanced out the richness of the soup to perfection, right? Say no more.

The moment we had all been waiting for came swiftly. Enter the main course of Medallion Herb Scented Cod with potato and herb gnocchi chili in a rich spicy tomato sauce. This was paired with the “wine of the night” the Montana Brancott Sauvignon Blanc 2008. If we had found the previous Sav. blanc good , then this next wine was phenomenal. Aromas of gooseberry and blackcurrant dominate and I am about to pass-out from the shear pleasure of just sniffing the wine. Of course, upon drinking this wine, we found that it had  all the Marlborough Sauvignon Blanc characters such as an intense fruitiness and something that can only be described as “an oily texture” and with a slightly acidic after taste. This went perfectly with the spicy cod and did not over-power the light, white meat of the fish whatsoever. The only thing that I did not like about the main course was the gnocchi which came across as too starchy and just rather heavy in texture. Other than that, full marks for wine and food pairing.

The second main course that was the red meat, came in the form of an Aromatic Lamb Shank with Macadamia herb crust, cheese gnocchi, chili and confit of garlic. This was paired with the Montana Terraces ‘T’ Marlborough Pinot Noir which was such a beautiful deep garnet red that I just wanted to stare at it all night, not drink it. Gosh, I want a dress in that colour. The aromas of fragrant ripe cherry, spicy toast and plum were intoxicating. The rich Pinot Noir really cut into the gaminess of the lamb extremely well.  This wine was spicy and complex and  came across  like it was made for the aromatic succulent lamb shank. Yes, lock and key.

For the grand finale we had dessert of Tiramisu and Coffee with cookies. No complaints here. A fine end to a fine night. After dinner, we were invited to tour Rootz, the dance club. It was nice but deserted.

I would like to thank Marian for her lovely invite and also Rachel Teoh of Millennium Associates Sdn Bhd for doing such an excellent job that night. Also a big thank you to Pernod Ricard’s Sladjan Maksimovic – without him, I would not have learnt so much about Montana wines as well as the art of wine and food pairing. 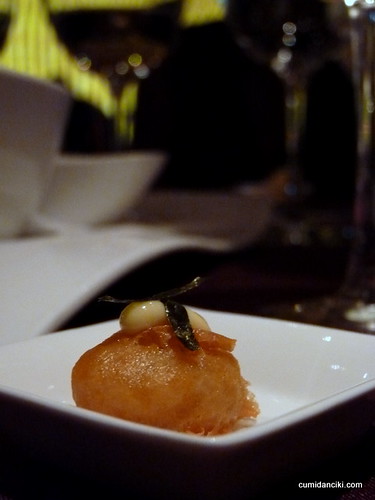 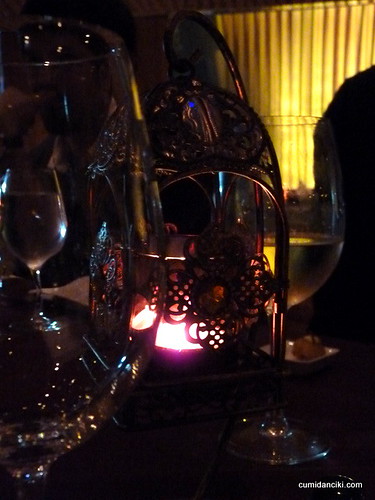 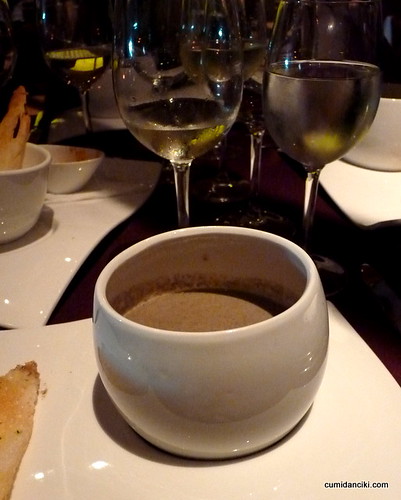 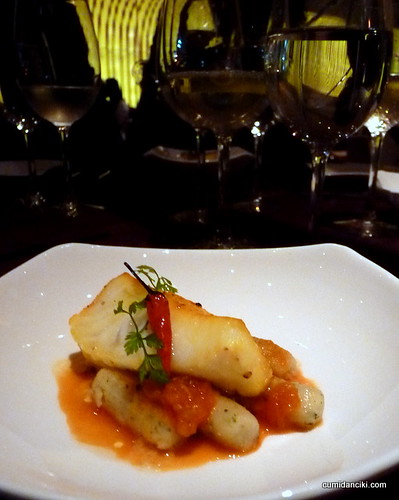 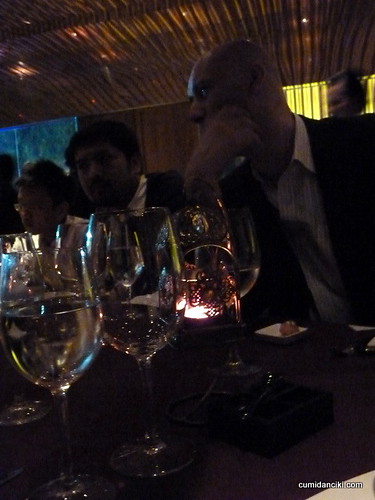 Guests at our table discuss the courses and the wines 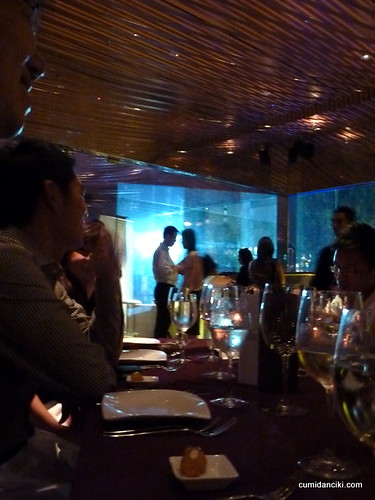 Teeq has a warm, unpretentious ambiance – easy for people to mingle and talk 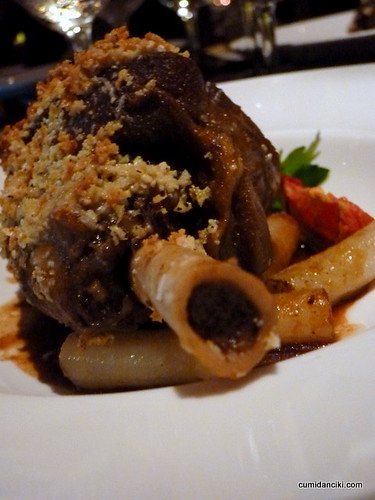 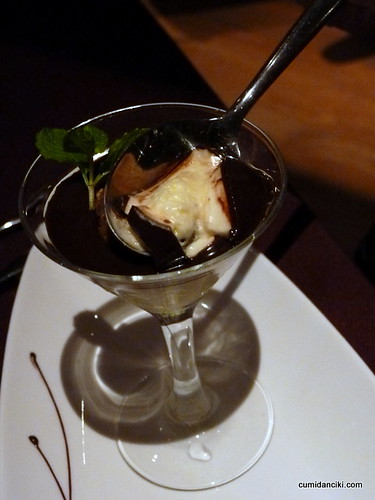 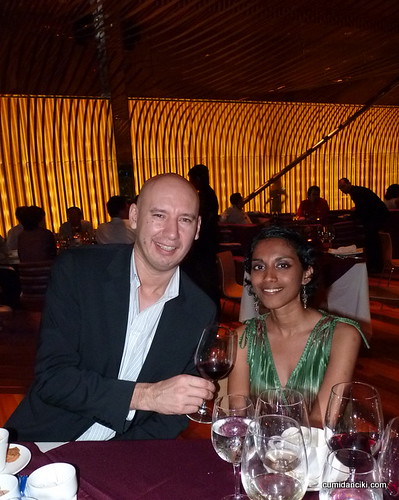 Chef Sam Leong cooks up some wonderful contemporary chinese dishes at Tao, Intercontinental Kuala Lumpur.. We had no idea that Chef Sam Leong would…