No, I am not back from the UK, but I prepared this post before I left. How’s that for hard-working;)

Chidori or Chidoriya, as this place is affectionately known as, means “a thousand birds” ..how lovely! The food they cook here is Japanese home-style and the owner and chef is a direct importer of  fresh seafood from Japan, particularly from Shizuoka. Her speech, looks and mannerisms mimics  a lovely japanese lady which led us to think that she was japanese until our inquisitive noses  sniffed deeper. We found out she is a local person named Lavender who has spent a good part of her life studying, working and settling down in Tokyo. After many years of working for others, she started up a japanese seafood trading business here. Gaining confidence from that venture, she set her mind on turning her dream into reality, that is to  open the doors of Cafe Chidori to japanese food lovers. 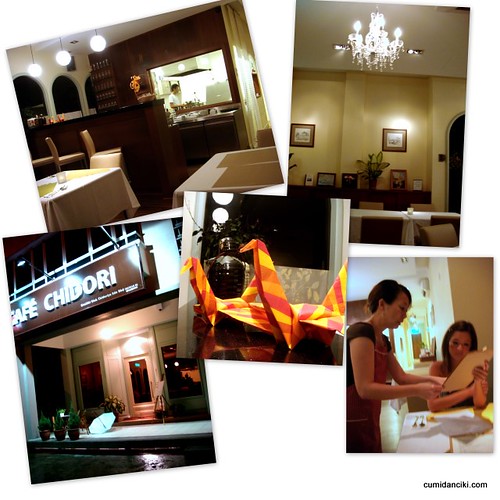 How did we find out about it? Cumi noticed Chidoriya in this new commercial area 2 months back. He was attracted by its unusual frontage (in an otherwise boring area) and had a peep  through the window then thought… hmmm.. must take Ciki here when she’s in the mood for jap food. And so we finally make it here and the review begins…  (Lavender tells us they they’ve just been opened over 2 months.)

Checking out the decor of the room, we were stunned by the amount of care that went into the space and interior design. It looks amazing with lots of intricate decorative detail. Color schemes were carefully chosen. A little dainty and very much welcoming. Check out the birds on the window panes if you ever swing by this place. Absolutely gorgeous. You can watch the chef preparing food from a large window behind the counter and there 2 hidden private dining rooms in the rear. Its evident that this warm place is all planned by the owner. Cumi couldn’t help but notice how obvious the EXIT/Keluar routes were since the signs were large and brightly lit. It’s not something we normally notice but i guess customer safety is important at Chidoriya. 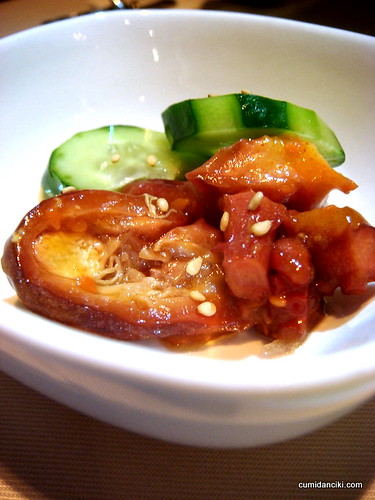 The starter was not some hyper-glamorous morsel of fine dining, in terms  of presentation, but it was totally 100% spot-on in terms of taste. The baby octopus starter, on the house, was extremely fresh. For obvious reasons.. they’re a direct importer of seafood. And this is the beginning of our wonderful dinner. 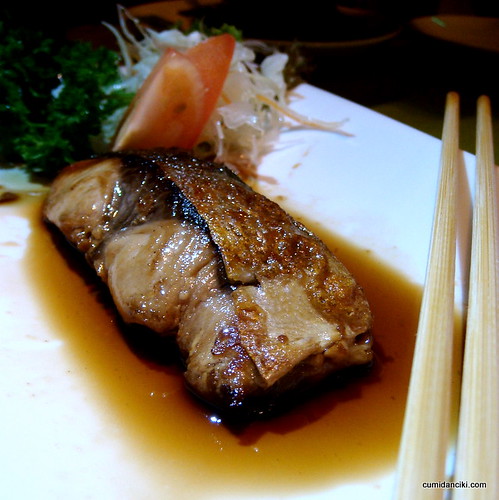 Another commendable thing about this place is that whilst the seasonal fish here is fresh and tastefully cooked, the prices are still really affordable, as you will  see from the price range.

What can I say, Yellow tail when fresh is always amazing. It’s simple yet such a delicious fish. The browning of the fish and the simmering in the sauce really brought out the wonderful natural flavours of the fish. 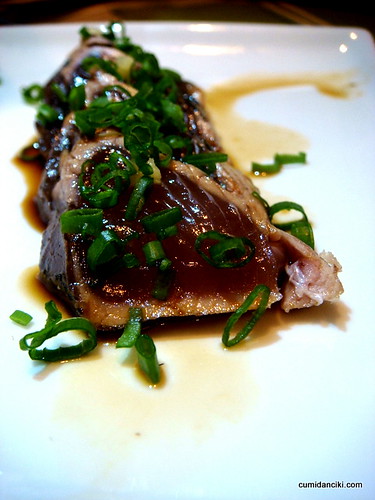 Introducing today’s special, the Katsuo Tataki. This is actually the bonito fish. The same fish from which you get the dancing bonito flakes that go on top of certain mushroom dishes. Katsuo Tataki is simply a fillet of katsuo that has been lightly seared on all sides leaving the inside raw. It is usually marinated in a special sauce or just dipped in the same when it is eaten. Delicious with a tinge of smokiness that was delightfully pleasing to the palate. It went really well with the sake we had. It was a light tasting rice wine which complimented with all the seafood dishes. We didn’t take down the name but it’s the only one available next to Kirin Beer so you won’t miss it! 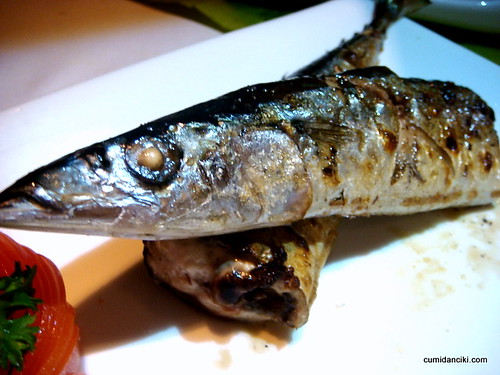 The sanma is the 10 minute wonder because it is so fast to cook ! Over cooking is not a good idea as it will render the meat dry and unpalatable. The chef said.

This to me, is the best preparation style for Japanese fish – the shio yaki. Shio means salt and yaki means grilled. So, just a shake of salt followed by grilling,  creates a delicacy that accentuates the fundamental quality of the fish itself. Lavender says that Japanese people love to eat the gut of the sanma and they leave nothing but the bones and the head. The gut I suppose is full of nutrition and represents a delicacy.  We however, found the gut to be incredibly bitter and ended up sweeping it to the side. I reckon not a lot of people could stomach this.. forgive the pun..

A word on this directly imported Hokkaido Sanma. This has to be the freshest, most fatty and succulent sanma I have eaten since my visit to Japan several months back. Apparently its not always available since its seasonal. 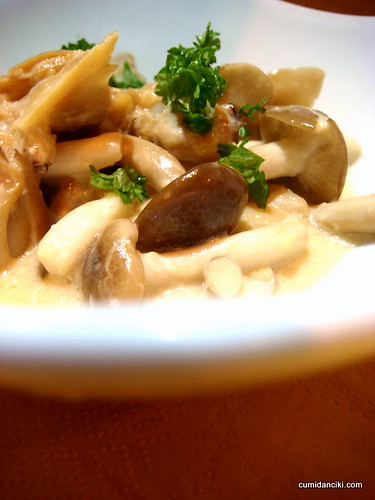 Japanese clam and mushroom cooked in a cheese base. Another winner. Both main ingredients were fresh and not overcooked. As we nibbled (we can’t really gobble  ‘japanese-size’ dishes here), we can’t help but say how sweet tasting the seafood here is. 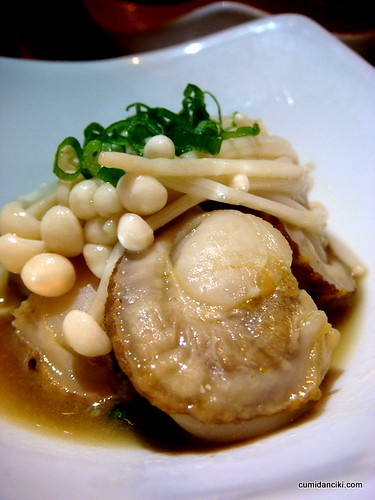 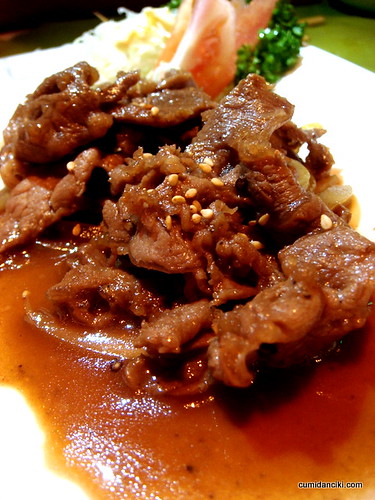 This wasn’t the best dish and it unfortunately was our final dish. This beef dish was tasty but a little tough, and would have been better with wagyu (and you can add another digit on the price). The wagyu was all out today, but we will be back to try it for sure. 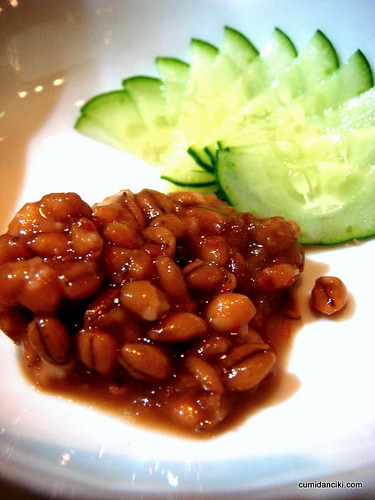 Some sort of fermented bean paste, on the house. This unusual dish is eaten with a slice of cucumber and it really refreshes the mouth and aids digestion. 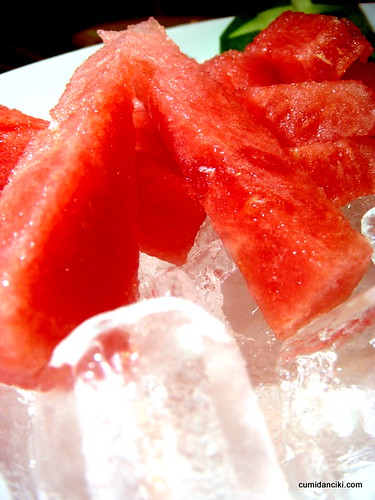 Watermelon on the house (yet again!) After dinner we chatted with the owner until closing time. The owner shared with us that her favourite food is japanese followed by Italian then Chinese. With ingredients direct from the land of the rising sun in the hands of an owner-chef who has lived and breathed japan for many years, its gotta be good. We found out for ourselves and you can too. Check it out, if you are in the area!

Today’s Chef in the Spotlight is a lovely lady who needs no introduction. She is the affable Chef Debbie Teoh who is famed for…