My Invitation read:
The Royal Norwegian Embassy cordially invites you to its annual Seafood Gala Dinner.

Wow! We felt so privileged to be on the press guest-list that night, thanks to the highly accomplished Ms Marian Eu ( of Scribe Media Link and the person organizing the PR event for the Royal Norwegian Embassy).

The bloggers at our table were, LL of AWOL, FBB , and Cumi & ciki! 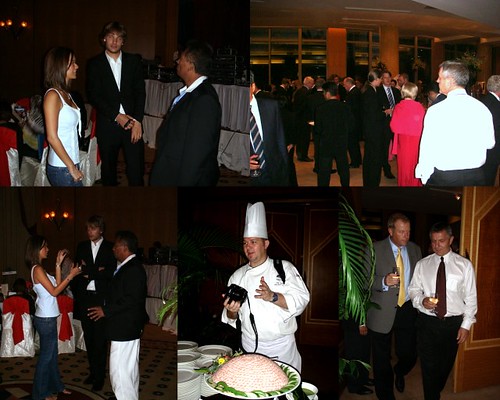 This year the annual Seafood Gala Dinner was held on Friday October 9 at the Mandarin Oriental Kuala Lumpur and promised to be the MOTHER of all seafood buffets!

Eventhough this was the first time I had heard about it, each year, the Royal Norwegian Embassy hosts this spectacular event that showcases the famed Norwegian seafood and produce, and entertainment.

We spotted many luminaries at the dinner and the guest of honour, Datuk Jacob Dungan Sagan, Deputy Minister of International Trade and Industries, was to present the Malaysia Norway Business Council (MNBC) Innovation Award to the winner.

The award is given to an outstanding member of the council to acknowledge its excellent performance. 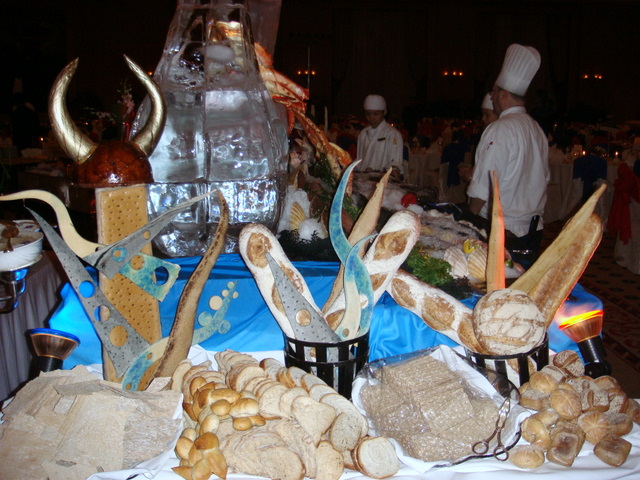 The MNBC Innovation Award is also to recognize companies that have contributed to increasing business and cross-cultural understanding between Norway and Malaysia. 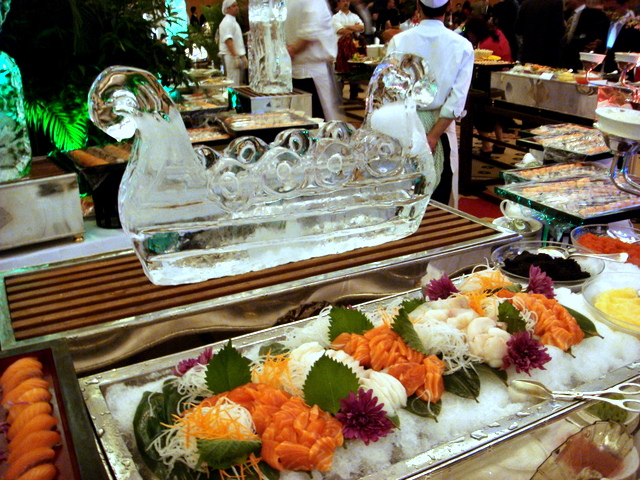 Well-known Norwegian chef Frank Naesheim and his team wow-ed us with a truly grand buffet of seafood flown in from Norway and presented in both Norwegian and Asian cooking styles. The spread was just mind-blogging and I remember steadying myself and thinking.. we really have our work cut out for us – both eating as well as photography! I just hope I do the spread justice (both eating as well as photography!)

What lay before us were Norwegian salmon and all its different forms, mackerel, Atlantic halibut, caviar, scallop, herring, crayfish and king-crab.. etc ..etc.. 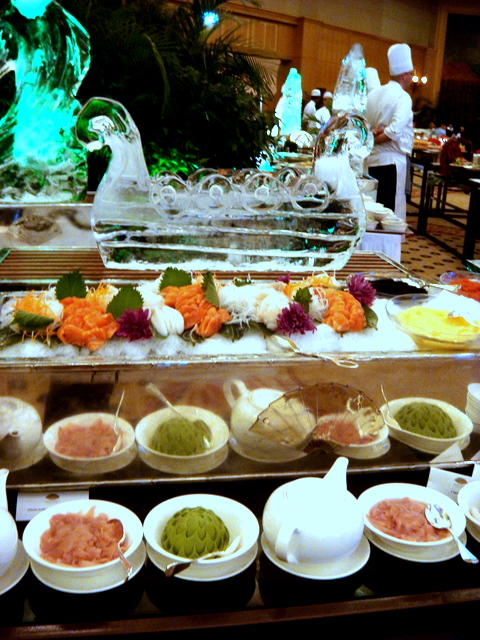 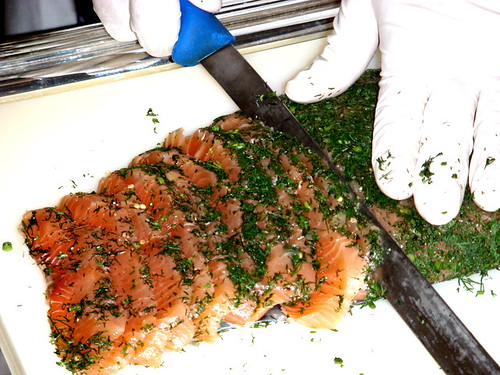 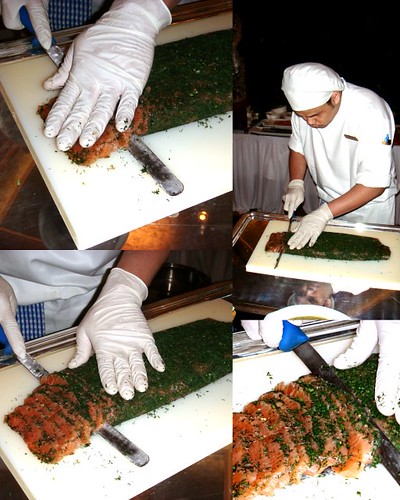 So what was impressive? The Gravlax Carving Station stands out, as well as the Smoked Salmon Station and the Caviar Station.

The steady hand of the Chef and just the sheer quantity of Caviar and Salmon was mind-numbing. 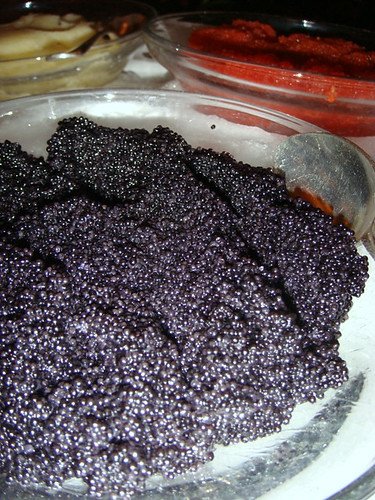 There was more to take in and sample. The Saba Mackerel Sushi and Amaebi, Altlantic Halibut and Salmon Sashimi glistened with succulence.. The Mustard Herring, Marinated Salmon Szechuan Style, Signature Salmon, Thai style, and Salad of Crayfish in Dill and Wasabi Mayonnaise are among more than 30 dishes in the cold food section that screamed to be eaten.. and boy did I eat it.. all! 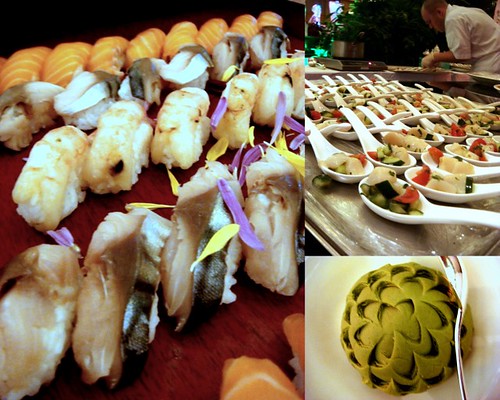 “So if you take me to dine
it’s Sake instead of wine.
If you haven’t tried sushi
it’s time you toed that line!”

Oh, I will certainly Toe the Line! 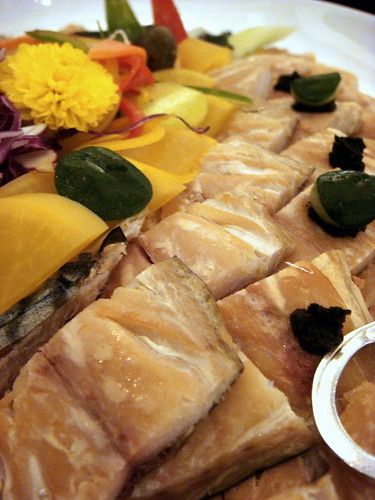 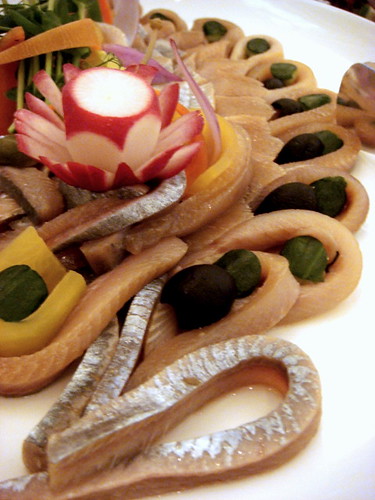 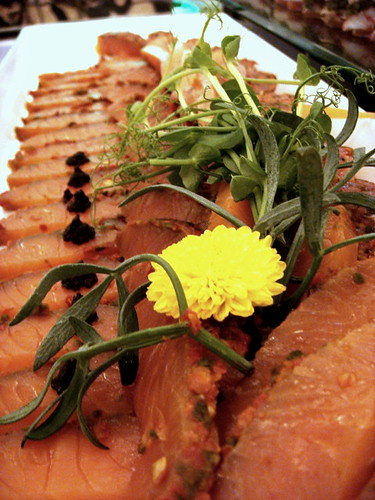 For those who do not fancy too much raw food, there was the cooked alternatives of Lemon Sole Fillet in Banana Leaf, Mussels with Sambal and Haddock Curry with Okra should spice things up. Then it’s the delicious Wok-fried King Crab Leg with Salted Egg Yolk, Steamed Turbot with Chilli, Hunan Style, Barbecued Saba with Teriyaki Sauce, Monkfish Masala and Salmon Tandoori for that spicy twist! 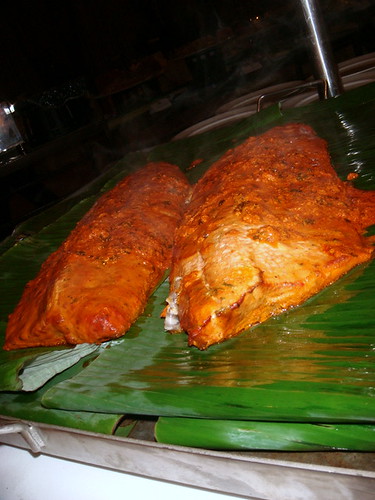 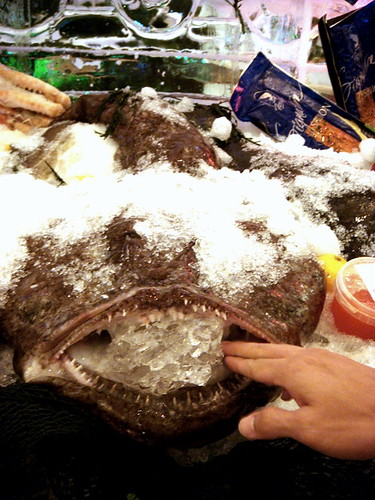 The MONK fish.. I would not do that if it was still swimming!
.
. 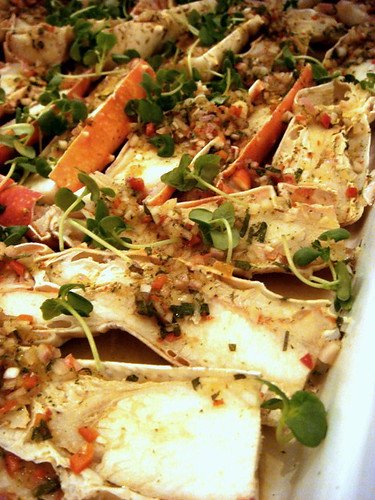 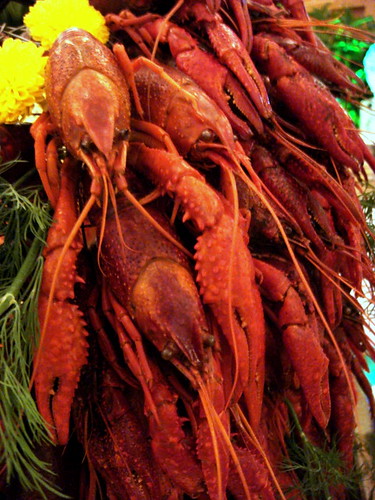 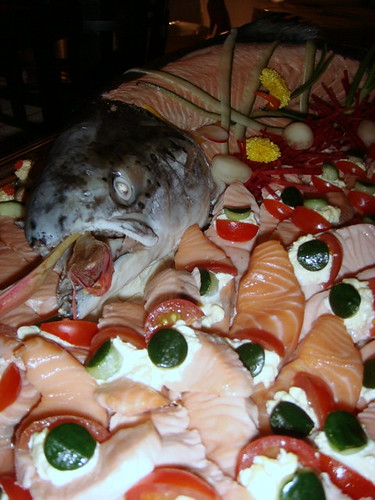 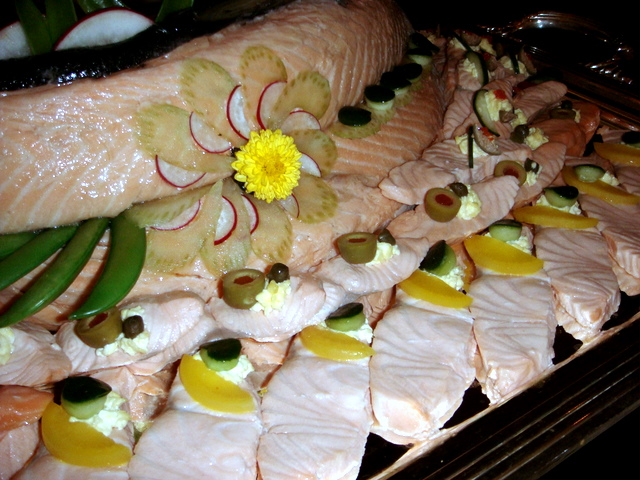 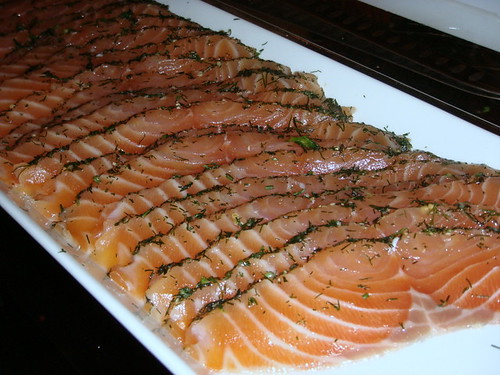 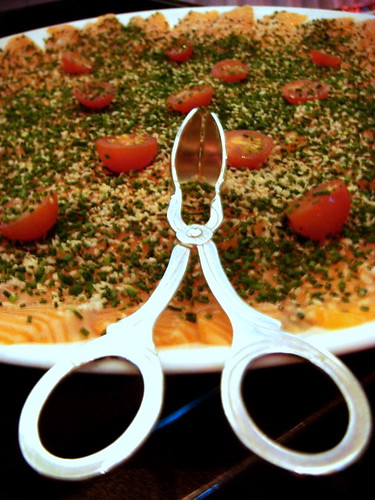 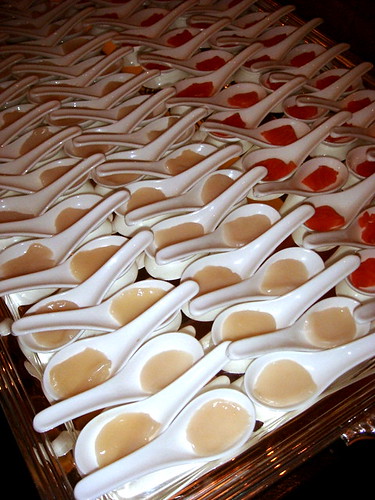 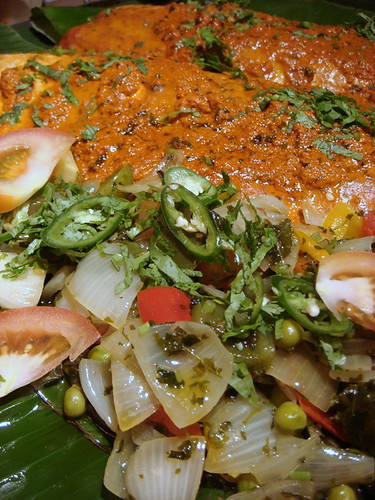 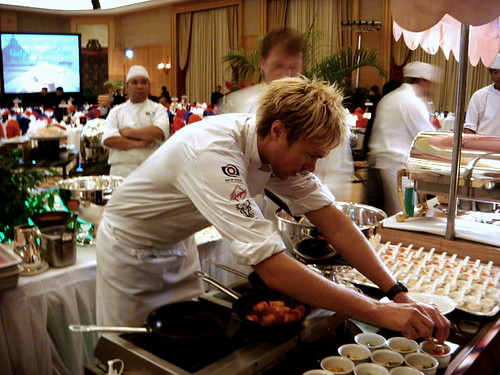 And then.. there were the dashing, most good looking, flying culinary circus troupe from Norway. 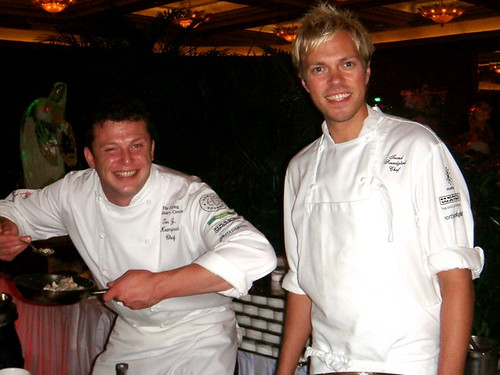 No, they are not a circus act. They are, in fact, extremely interesting individuals who love to amuse and entertain their guests with their somewhat ‘colorful’ personalities.

Guests of the Flying Culinary Circus include the royal families of the UK, Spain and Norway at Buckingham Palace, a gala dinner at Manny Mashouf’s residence in Bel Air, US, appearances in Hollywood and Kuala Lumpur, as well as annual gourmet cooking courses in Tuscany, Italy. 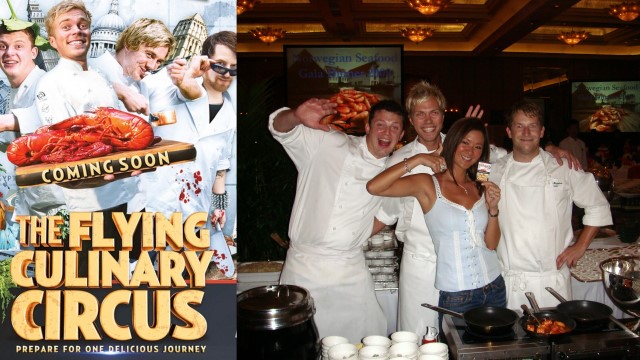 With the boys in the house, you get to be entertained by, not one chef, but four.., each of whom has their own field of specialty.

Mathias Bugge Oien is a sauce and soup expert. He is chef of Norway’s best voted restaurant, Bagatelle, from 2003 to 2005.
Trond Svendgard is a fish and shellfish expert who has won gold in the Chef Olympics and owns three successful restaurants.
Tor Jorgen Kramprud Arnesen focuses on herbs and vegetables. He hails from Norway’s most exclusive resort ­ The Per Gynt farm ­ and ,
Hans Kristian Larsens passion is meat. He was the chef at Mel Gibson’s restaurant between 2000 and 2002, traveled as a chef through Thailand and Australia for a year, and also worked at Bagatelle.

There’s me with the Flying circus. They are so bloody tall these Norwegians I tell ya. 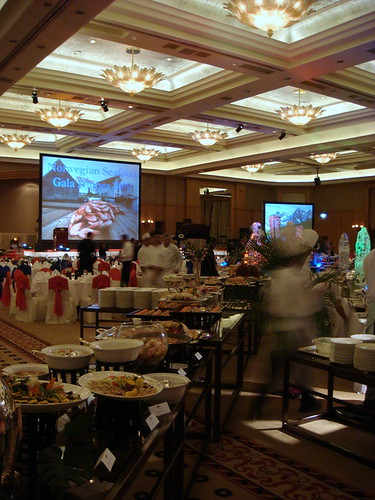 The doors open and everybody gets busy eating. 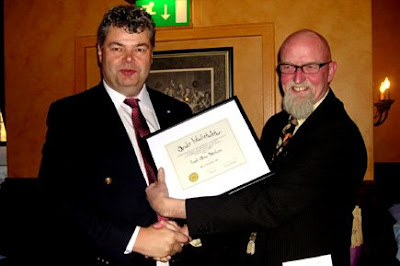 Frank is on the left.
photo from here


Ask anybody about Chef Frank Naesheim’s seafood dinners and they will tell you that they have become an annual highlight for the Norwegian business community in Malaysia and Singapore.

He has worked in two and three-star Michelin restaurants in France. He was chef de cuisine at the Bagatelle in Oslo when it was awarded a Michelin star, the first restaurant in Norway to be honoured this way.

Known as the Salmon King in Asia, Naesheim first came to work as executive chef at theVikings Restaurant in Singapore in 1987.

Naesheim’s Salmon King title is well deserved. He has written a cookbook Norwegian Salmon in Asia, produced recipe booklets for salmon and organised the Salmon Buffet of the Century in Singapore. He has been guest chef in numerous food promotions in Asia and Norway. 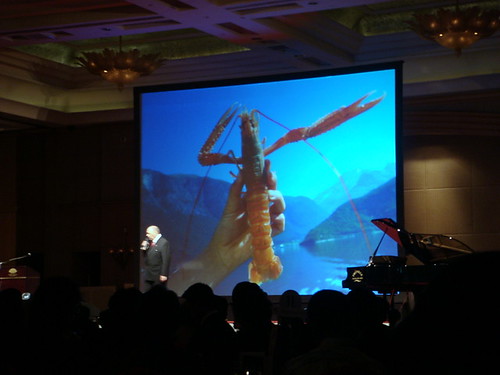 After dinner, the award (erm, not just any award… but), the Malaysia Norway Business Council Innovation Award was announced.

This is the third year the award is being given out. Five different criteria are used to judge the finalists. They must show excellence in:

1. A Sustainable Operation in Malaysia and develop a strategy to maintain its role as a key player in the industry.

3.Commitment to Technology Transfer from the best practices in Norway to develop the Malaysian workforce and contribute to Malaysia’s development within the industrial sectors.

5.Environmental Awareness and Action, with clearly defined strategies of implementing environmental-friendly products and manufacturing processes in the Malaysian operation. 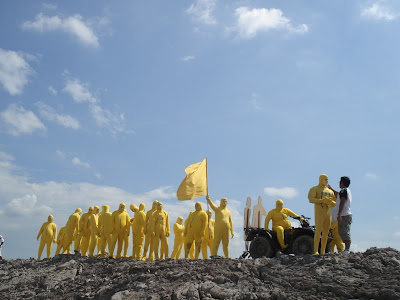 DIGI!
(Did u know that Digi is Norwegian? Well I certainly did not, until that night, so, there you go.)

Finally as our bellies were full, our insatiable appetites for all things Norwegian satiated, the well-known Norwegian singer, composer and actress Karoline Kruger sang for us in her most beautiful and unique voice. 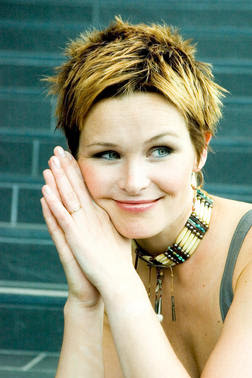 Karoline Kruger is a renowned singer-songwriter and actress in Norway. She has recorded six solo albums and has been featured on numerous others and man could she sing!

What can we say?

All in all a spectacular night of fine food and entertainment.
We felt privileged to be part of this great event.
Thank you once again to Ms. Marian Eu for organizing things the way you did. We had a truly memorable time!

Happy #followfriday readers! This week’s Blogger in the Spotlight (BITS) is none other than Mark who lives in San Francisco. Mark is a “Mexico…