14. (**later, as if we were not stuffed to the max enough, Just Heavenly brought along the ‘Quiche Lorraine’ and THE most divine ‘Victoria Sponge’ crafted especially for Harrods! – as modeled by the Luscious Lemongrass )

15. Booze by all in attendance!

Footnote: unless otherwise stated, every single dish was prepared by the extraordinary man himself.. Mr. Fatboybakes:P 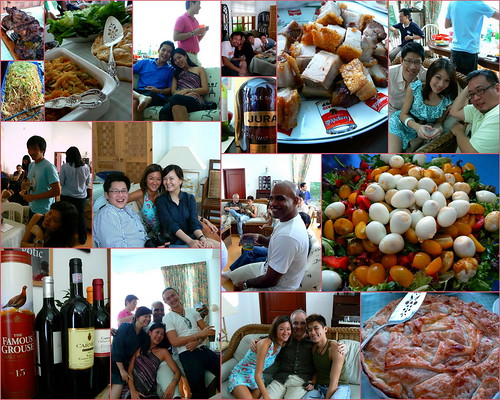 Good thing there were only 15 items on the menu.. because by 6pm, we were so stuffed, we could hardly count!
However, if you think the party ended at 6pm, you have another thing coming. Cumi&Ciki left in the early evening, because they had to get up at 5am for a run the next morning.. however, 80% of the party people stayed on till 11pm! (ok,ok.. now Craving Joe’s and LL’s comments have given a clearer update on the actual situation – that some went, some stayed on.. and then some came back BUT all in all it felt like most stayed till the end.. which was midnight!) 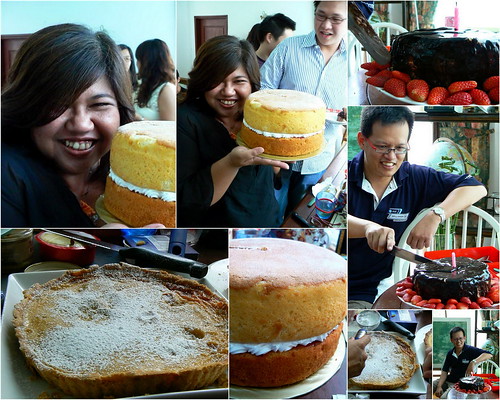 As promised, photo of the luscious LL and the Victoria Sponge .. don’t know who’s more voluptuous .. the cake or the model.. oo-er:P
And not forgetting Splashie boy who celebrated his 21st birthday.. may you continue to eat cake and grow up big and strong !

Fbb, on behalf of all who were present (as well as not present.. i am referring to one dear lil’ fat monkey!) (also Jules & L) thanks for being such a splendid, kind and generous host! Next round …. POOL PARTY!

Many more will blog this amazing event.. so far, read..
Masak masak !

NEWS FLASH!
harlo everybody! With regards to the NST article that came out yesterday on Cumi&Ciki.. let us just clarify because of the many SMSs.. I SAY MAN.. these reporters I tell you, are they actually listening when they talk to you huh ? 😛
Cumi runs an extreme adventure/sports advisory company…(check it out at www dot whoa-adventures dot com) he himself is an extreme sports enthusiast .. he is NOT a tour guide!
For adventures and fun in the sun for everybody, check out/click WHOA!
Cheers buddies!

Every time we are in the Pasar Seni area, and we’ve finished with lunch, we always walk past this Indian Banana leaf rice (BLR)…